*Before you read this, feel free to research everything I talk about in this article for yourself before coming up with your own conclusions. This is just my own hot take on the argument and how I saw things go down. Please don’t leave any hate for either party involved on any of their social media or through any means of contacting them.”

I just happened to be scrolling through Twitter when I saw one of my favorite makeup artists—Manny MUA—post a tweet at 10:50 p.m. with a few photos, reading, “I don’t think the brand liked today[‘s] video…”

I clicked on the photos, allegedly from the Instagram account of a “luxury DIY at-home lash” brand called Lashify: 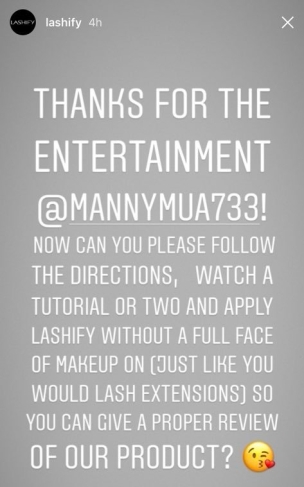 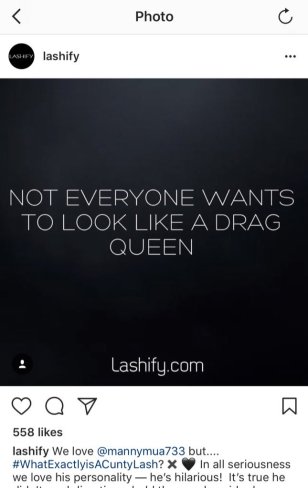 Both photos were public, where anyone who followed either account (or was just passing through) could see. If you haven’t seen the original review video on Manny’s channel, you can take a look here.

In the YouTube video in question, Manny claims he’s “TRYING THE WORLD’S MOST EXPENSIVE LASHES! $125?! WTF” and states that it is a DIY lash extension kit called “The Control Kit.” Now, it is to be noted that he has on a full face of makeup before putting on these lashes—that is important later on in the story. He says explicitly in the video that he’s not reading any instructions because he wants to see how user-friendly the Control Kit he purchased is.

The kit included the fuse control wand (retailed at $45, but not sold separately), a large on-the-go mirror, the whisper light dual-sided black and clear flexible bond with biotin (retailed at $18), the seal and finish clear coat (retailed at $18) and two sets of their “Gossamer” lashes (sets A12 and A14 retailed at $40).

If you add that all up, you get $122. Is it a $125 pair of lashes as the video suggests? Not exactly, but since it’s a necessity to purchase the other products to put the lashes on correctly, it might as well be.

About three minutes into the video, Manny reads the package directing him to start with clean, dry lashes. He states that while his lashes are dry, he does have mascara on and then goes to take it off after debating on whether to keep it on or not.

Throughout the video, Manny gives his thoughts on the process of putting them on stating that it took him five minutes to put one eye on and his lashes are “very sticky.” Manny says in the video that he was looking for a bold, dramatic eye—or, directly quoting, “cunty.”

Manny’s final thoughts: “For me, this was more of a flop situation because I don’t like how they look and it was actually really hard to do… I think that’s the gag is that it’s $125 bucks, I personally think that’s very very expensive for the whole entire little kit.”

Lashify’s founder Sahara Lotti was accused of slamming Manny’s followers, also known as Mannyacs, on an Instagram Live, calling them “idiots” and showing viewers how to “properly” put on the lashes. It was reported by viewers of the IG Live that Sahara took anywhere from 30 minutes to 45 minutes just to put lashes on ONE eye. Seems like such great lengths to go through all because of a bad review.

In a clip of the video, recorded by Twitter user @mkcourdmua, Sahara throws out an extremely sexist response to their displeasure with Manny’s review, stating, “Honestly, I don’t know what he thought they were. But I have to remember, at the end of the day, he can have all the make up he wants but he’s still a dude, ” Sahara shrugs and laughs, “He’s still a dude, man. Manny, you still a dude, bro.”

Not cool. You can view the clip here.

Manny fired back on Twitter, tweeting out, “What the f*** does this even mean? “Manny you’re still a dude”… so you’re saying I can’t use it cause I’m a dude… okay cool and she’s sexist! I love it! Lashify you’re officially cancelled mamma

At some point when the heat was to a full boil, Lashify posted an “apology” to their IG story (but Manny fans aren’t buying it):

Lashify has since put their Instagram account on private, possibly their only smart move thus far in this PR nightmare.

Thankfully, Twitter has a sense of humor about it all:

Oh and when, you have to add a "but" in your apology….it's not genuine. #lashify pic.twitter.com/jxLEy4XBGu

Can y’all believe lashify single handily ruined their company before even getting started pic.twitter.com/kdHeVCYJCp

Hey there! I'm Allie; a photographer, blogger and self-taught makeup fanatic living in the 865. I'm a book aficionada with a healthy obsession for coffee and sweet tea. I am always on the lookout for a new adventure, whether it be a new menu item or a new travel hot spot. Read up and enjoy your stay~

Allie Taylor is a Florida native and graduate of Florida Gulf Coast University with a Bachelors degree in Journalism. She spent three years at the student-run newspaper, Eagle News, with her last year as Editor of Entertainment and Lifestyle. She currently lives in Knoxville, Tennessee with her boyfriend Jacob (a mechanical engineering graduate of the University of Tennessee) and spends her time reading, writing and relaxing.